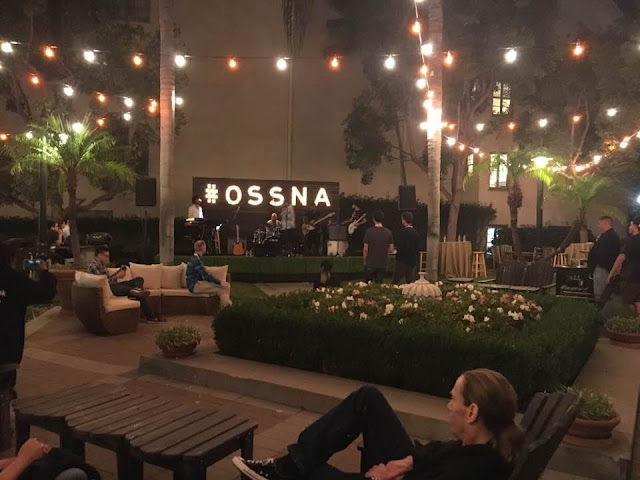 Open Source Summit is an open source technical conference in North America, gathering 2,000+ developers, operators and community leadership professionals to collaborate, share information and learn about the latest in open source technologies, including Linux, containers, cloud computing and more.
At the Open Source Summit, you can expect to collaborate, share information and learn across a wide variety of topics like LinuxCon, ContainerCon, CloudOpen. read more
http://events.linuxfoundation.org/events/open-source-summit-north-america/program/about

My last week was the best week than any other. Last week it was a great happened in Open Source Summit North America 2017.  I was a speaker at the conference.  radix-tree-idr-apis-and-their-test-suite I presented "Implementing IDR in file descriptor allocation code path". My project deals with converting custom file descriptors allocation code to use the IDR resulting in memory saving for processes with relatively few open files and improving the performance of workloads with very large number of open files. It was a very different experience. People loved my subject and internship.They enjoyed so much. I would like to say Special Thanks to my Mentors Matthew Wilcox and Rik Van Riel. I also want to give Thanks to Laura Abbott, Marina Zhurakhinskaya, Sarah Sharp, Helen Koike. I met a lot of people there. They told me about their work, the projects going on in Open Source and a lot of other things. 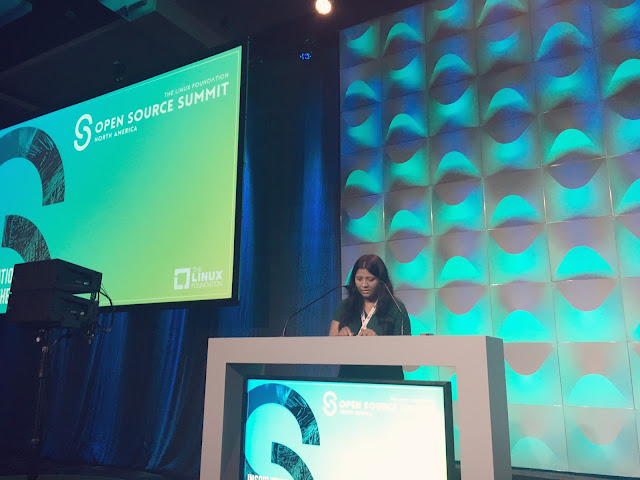 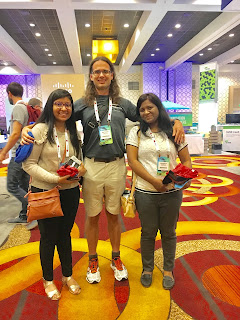 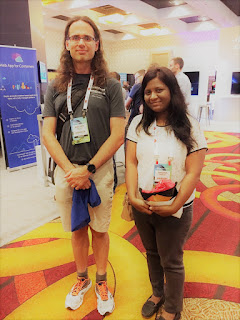 He has spoken a few minutes about open source in 2017 and it's been a pretty incredible year and open source and you know things just keep getting better and today I thought I would talk to everyone about just how open source isn't growing it's actually accelerating exponentially in terms of its influence in technology and in society and-and these numbers are just amazing there are 23 million open-source developers worldwide I think they're like 22 million Republic accounts on GitHub 64 million repositories 41 million lines of code eleven hundred new projects every single day and then there are 10,000 new versions of different open source projects every single day it's pretty amazing just the growth and the sheer number of developers and projects in open source and even within individual projects speed is accelerating.
I liked Jim's keynote too much. The open source development he explained very beautifully. I met him personally later and he is very nice, he talked to me despite being very great. 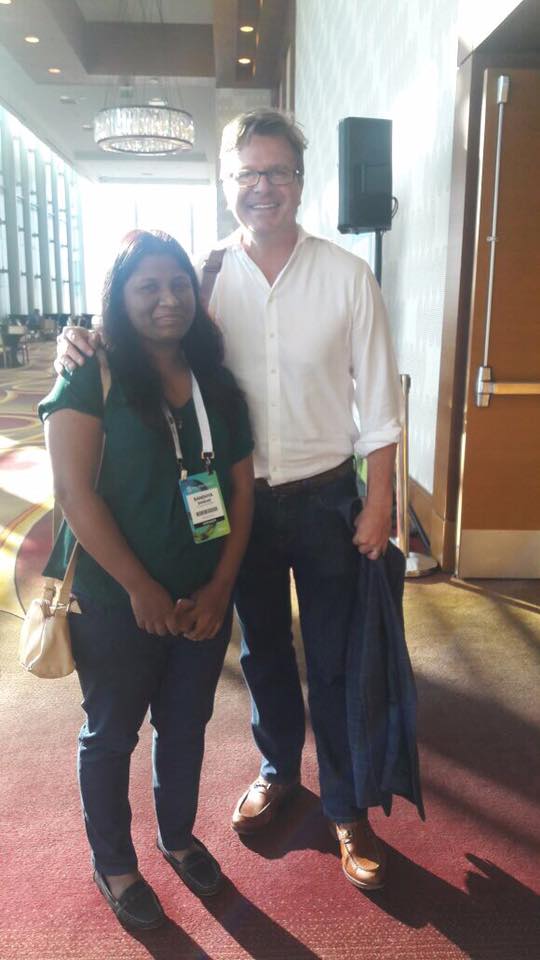 KEYNOTE: THE PRESENT AND FUTURE OF TECH - AI - TANMAY BAKSHI
He’s using cognitive and cloud computing to change the world, through his open-source initiatives, for instance, “The Cognitive Story”, meant to augment and amplify human capabilities; and “AskTanmay”, the world’s first Web-Based NLQA System, built using IBM Watson’s Cognitive Capabilities. His learning and sharing experience of 8 years in the fields of software and cognitive development, has taught him how to best utilize and apply AI in fields ranging from banking and finance to healthcare and medicine to music and chatbots. 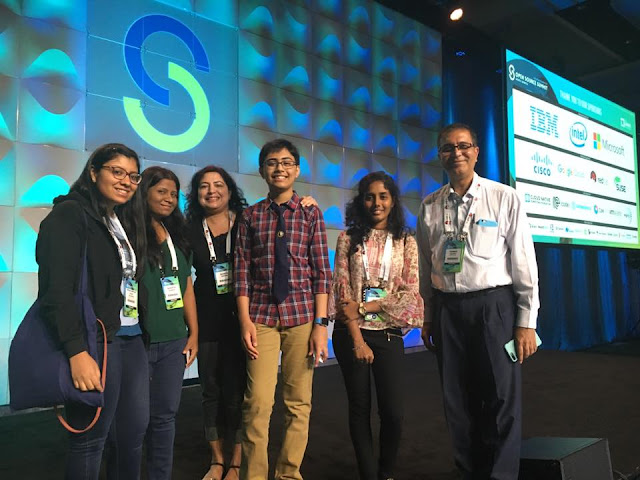 Matthew Wilcox
The new XArray is easier to use than the radix tree. Conceptually, it is an array of 16 quintillion pointers, all of which are initially NULL. Just like an array, its basic operations are 'load' and 'store', unlike a tree's 'lookup', 'insert' and 'delete'. It provides some more advanced operations and enables users to build their own operations. This talk covers general aspects of API design for C programmers, as well as particular considerations for kernel API design due to the constrained environment. 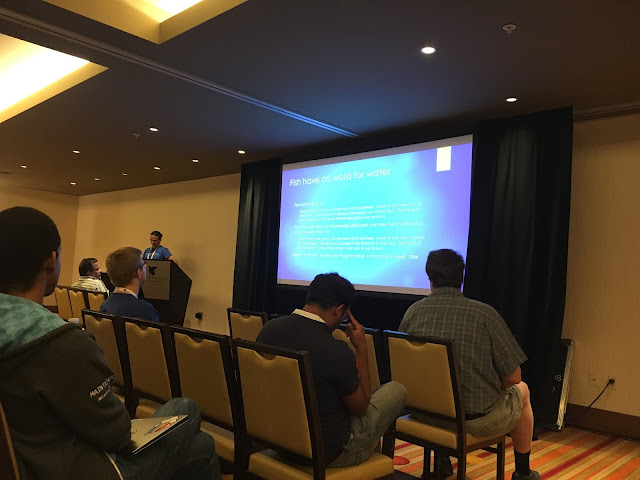 Paul McKenney
This talk will look at a few representative RCU CPU stall warning messages and show how they can be decoded into real information that can help you find otherwise silent hangs the easy way.
Decoding Those Inscrutable RCU CPU Stall Warnings - Paul McKenney, IBM 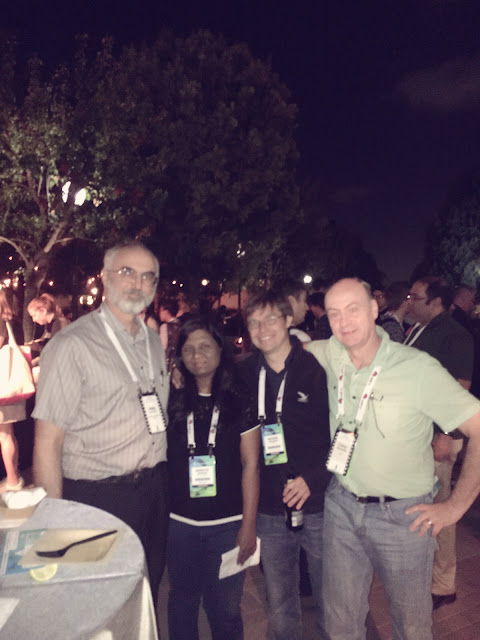 Gabriel Krisman Bertazi
What influences a program's performance? Some reasons are quite obvious, like the algorithm implemented and the number of execution cycles, but what about the order in which libraries were linked? Or the shell environment size? Or even the sequence and which compiler optimizations were applied? In fact, modern computer systems include such a multitude of features and options, whose interaction with each other can affect the workload's performance, that it is surprisingly hard to write code that fully benefits from the potential of the CPU. In this talk, we will discuss how small changes in the code and in the execution environment can impact the execution time and how you can use Linux performance assessment tools, like perf and valgrind, to detect and mitigate such pitfalls.
https://schd.ws/hosted_files/ossna2017/b3/code-detective.pdf

Sarah Sharp
Sarah is also a co-coordinator for Outreachy, a paid internship program for increasing diversity in open source projects. Applications are open to women (cis and trans), trans men, and genderqueer people, and United States residents of any gender who are Black/African American, Hispanic/Latin@, American Indian, Alaska Native, Native Hawaiian, or Pacific Islander.
I met her and I really enjoyed talking to Sarah. 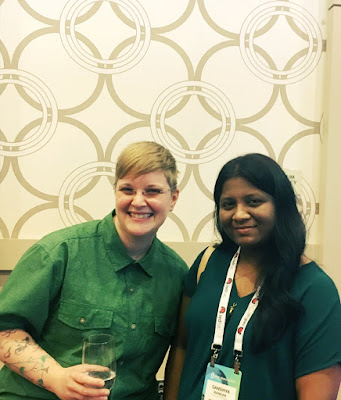 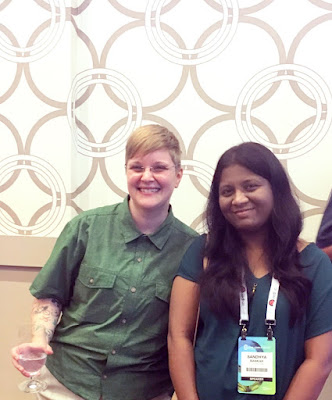 I clicked some pictures with people. I met people I wanted to meet them a lot of days

Greg kroah-hartman
My first kernel patch was accepted by gregkh. It was really beautiful feeling. 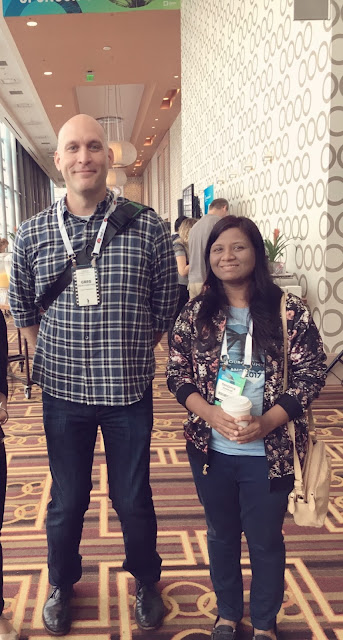 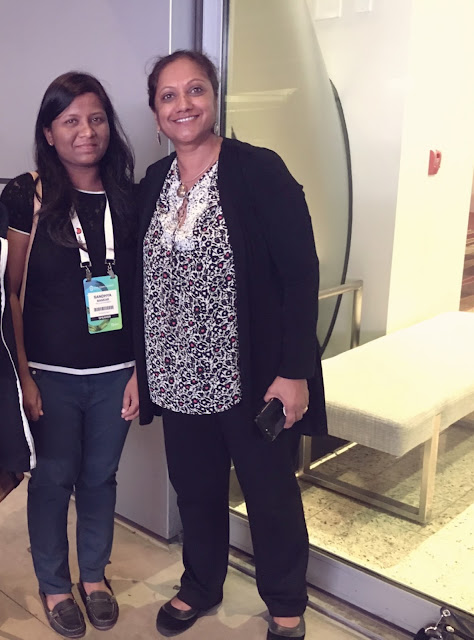 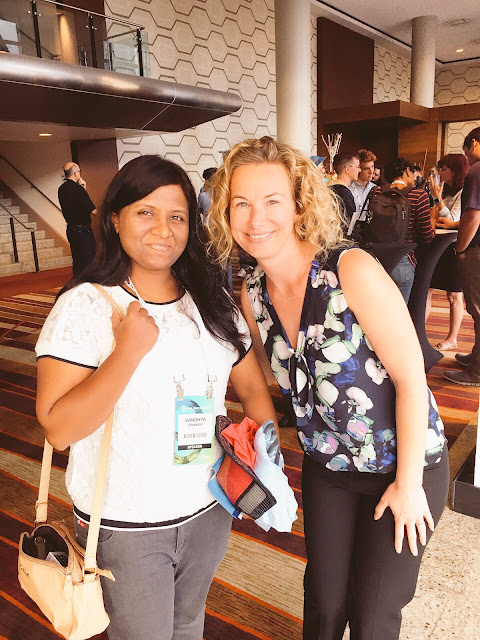 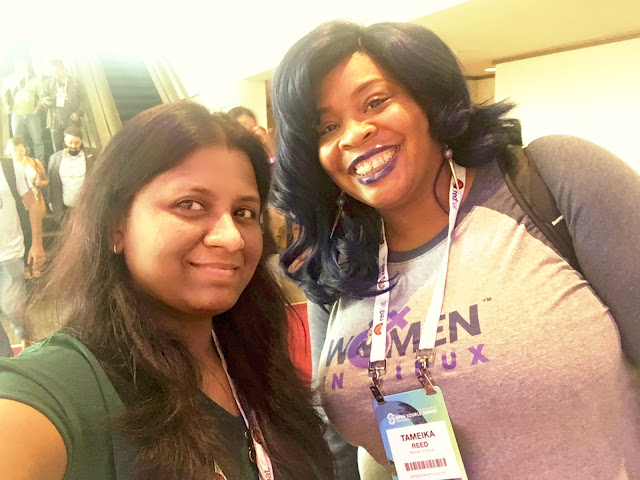 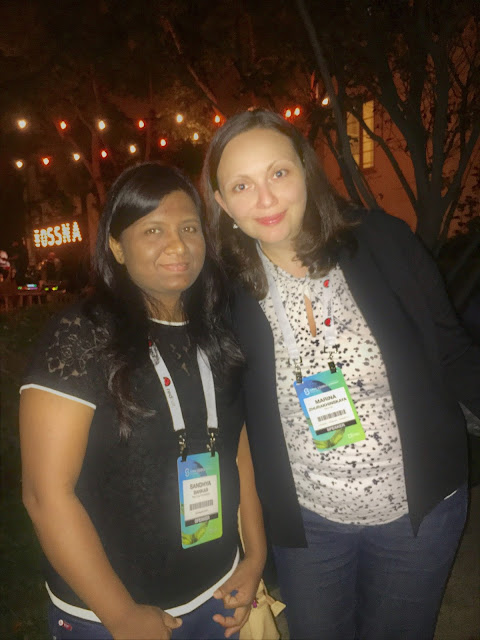 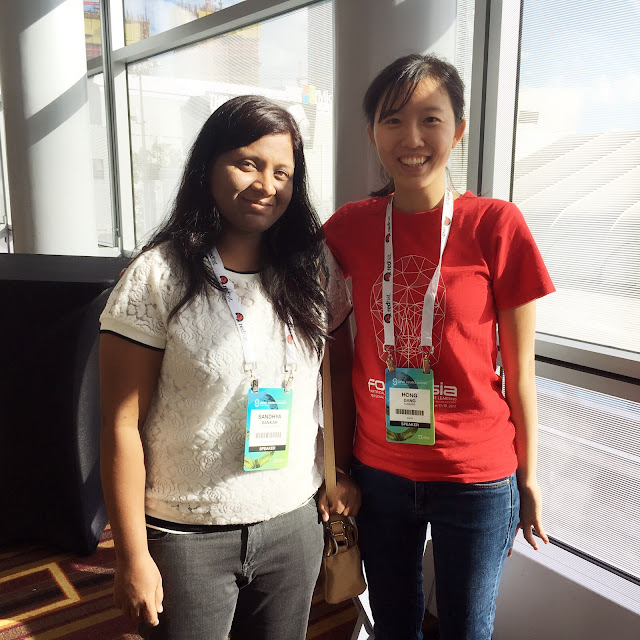 Finally my Cospeaker and Outreachy friends, 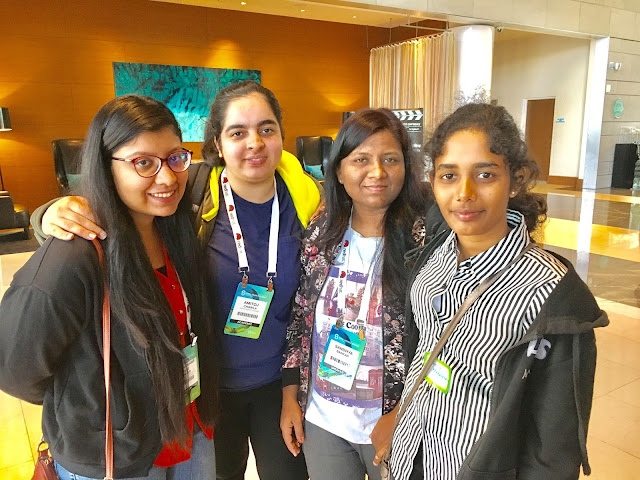 I would like to thanks to The Linux Foundation and Outreachy for sponsoring my trip.

Popular posts from this blog 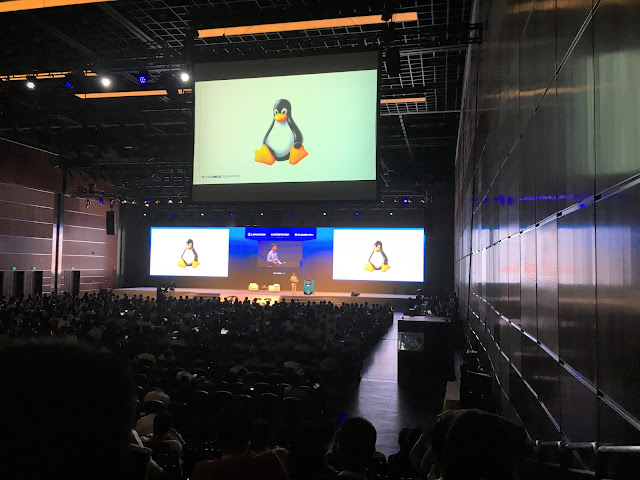 About At LC3, attendees can expect to collaborate, share information and learn about the newest  and most interesting open source technologies, including Linux, containers, cloud technologies,  networking, microservices and more; in addition to gaining insight into how to navigate and  lead in the open source community. Three conferences in one, this event is a technical conference  for developers, operations experts (architects, sysadmins, develops), business, compliance and  legal leadership and other professionals to come together in an informal setting to learn from  open source experts, have fascinating discussions, collaborate with peers, and gain a competitive  the advantage with innovative open solutions.
Read more 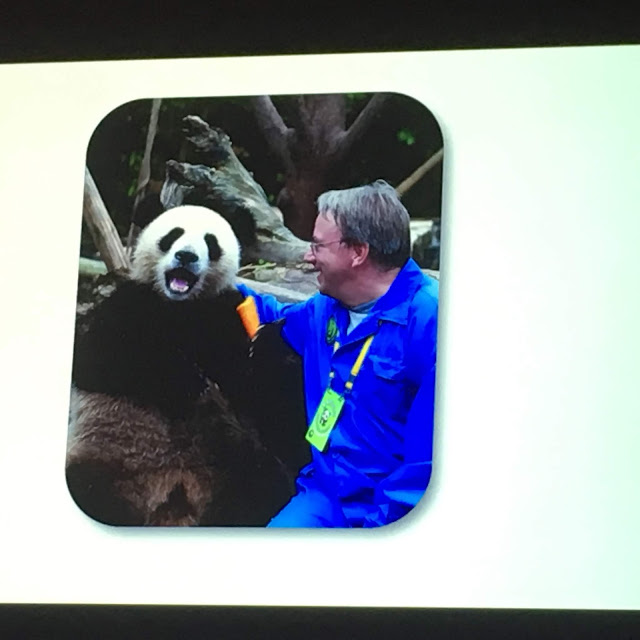